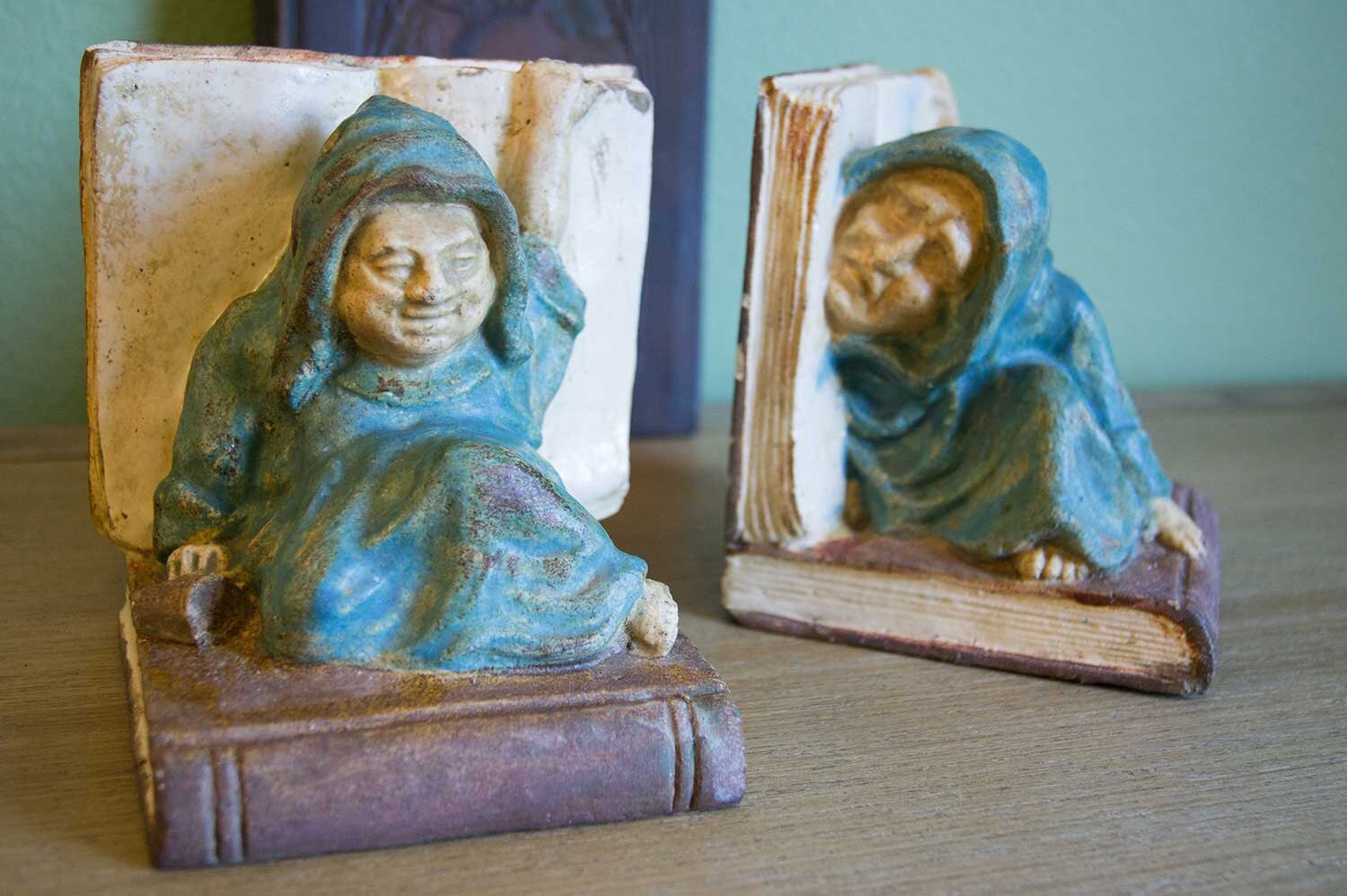 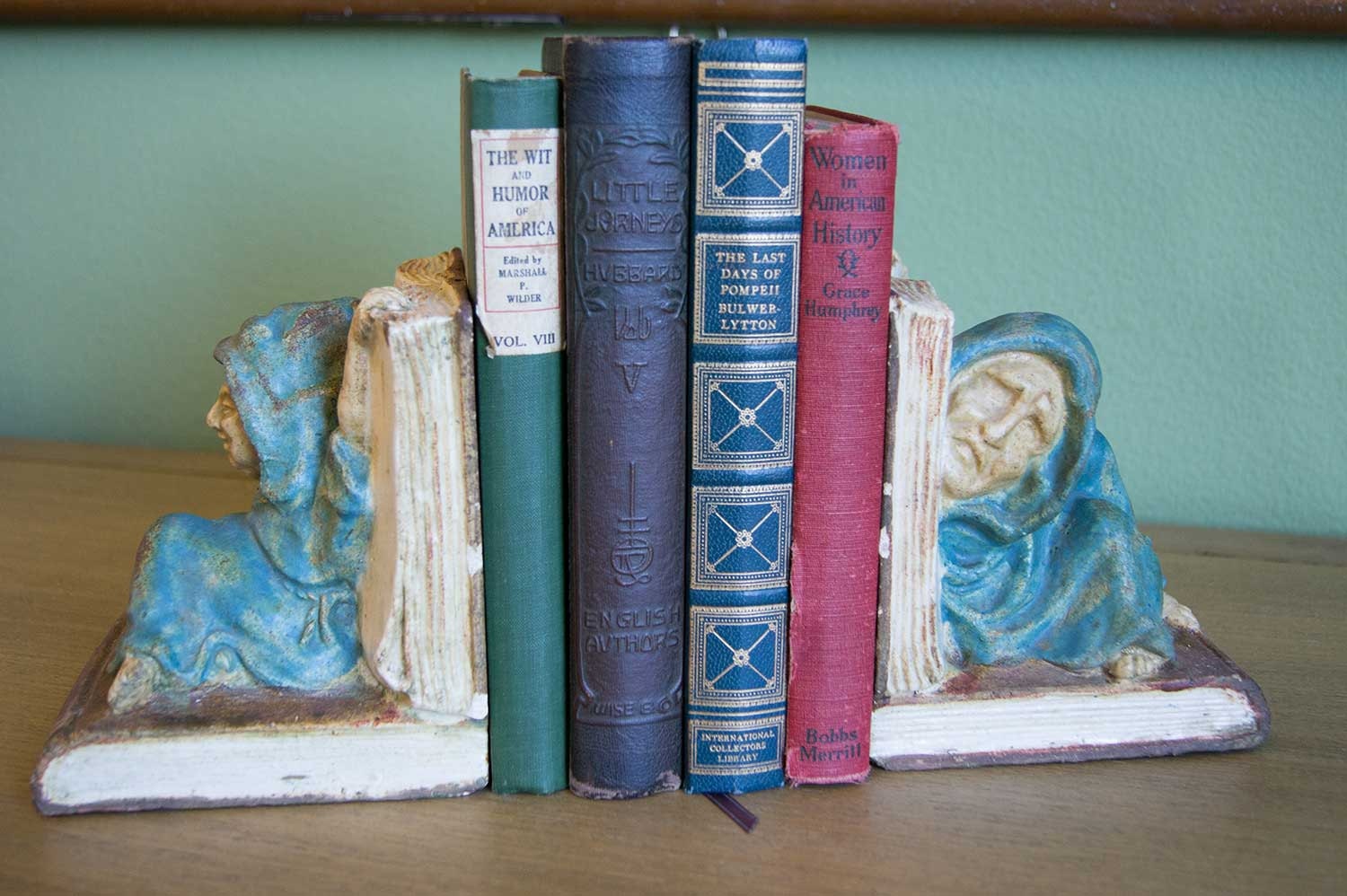 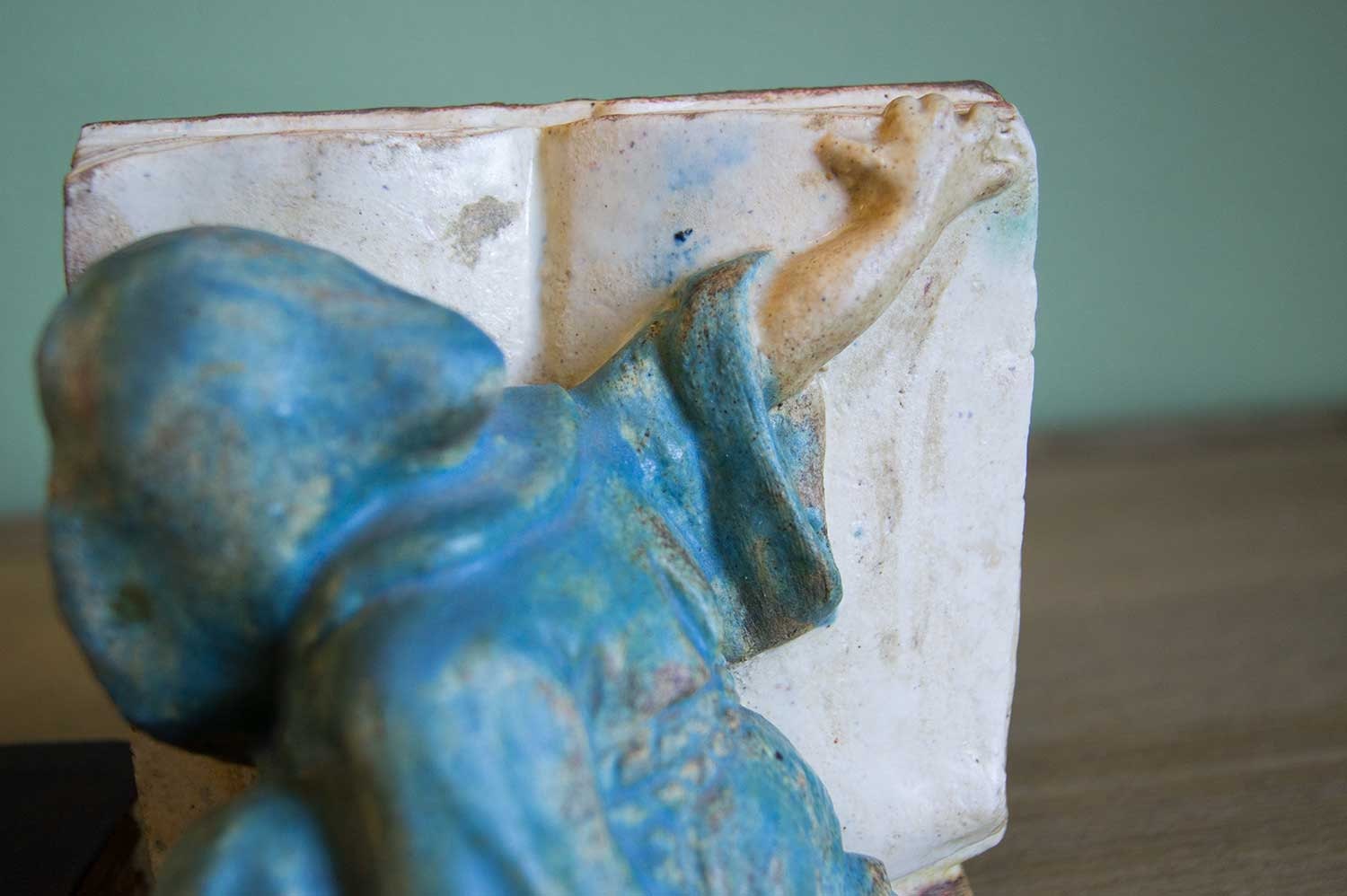 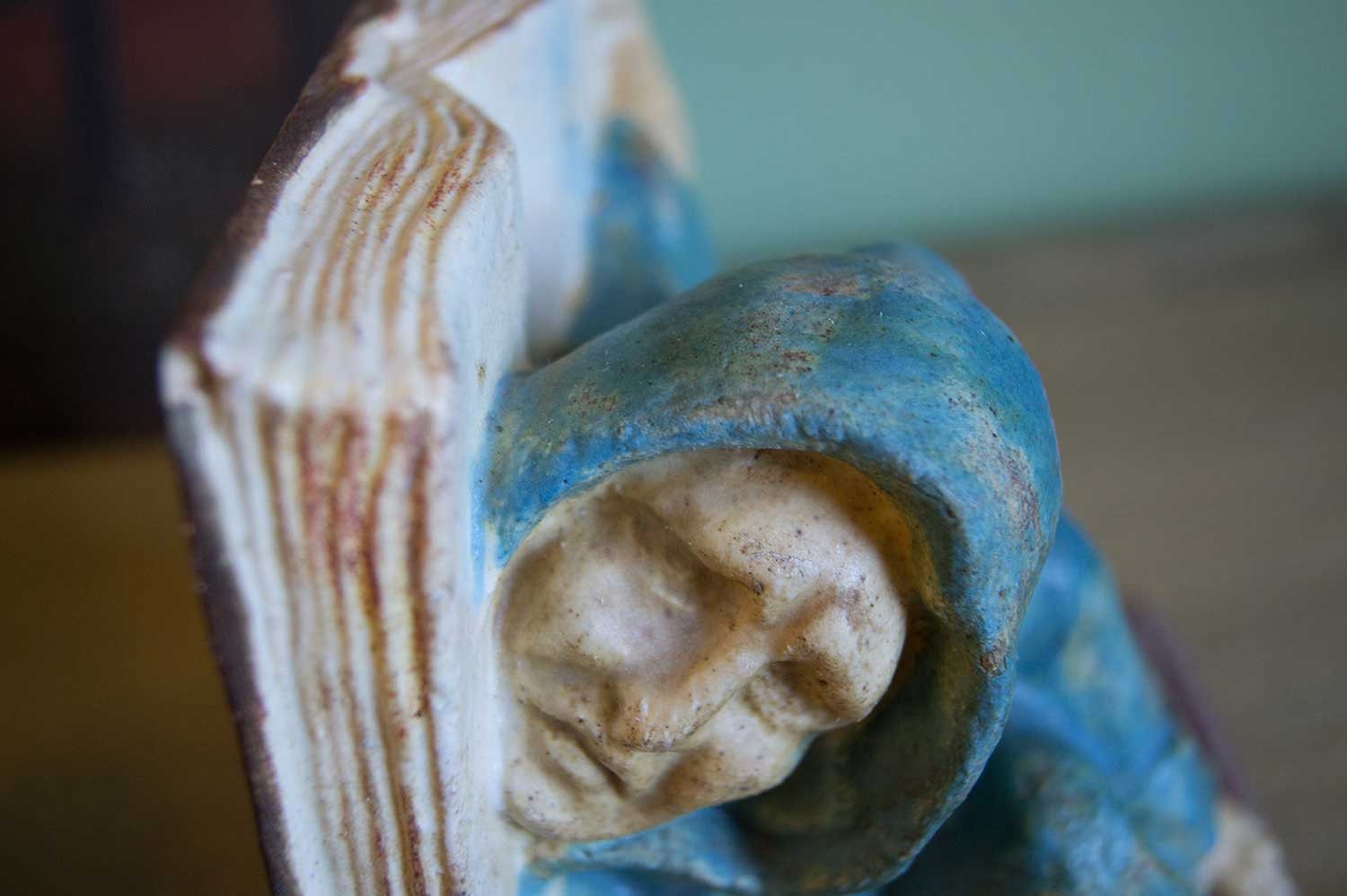 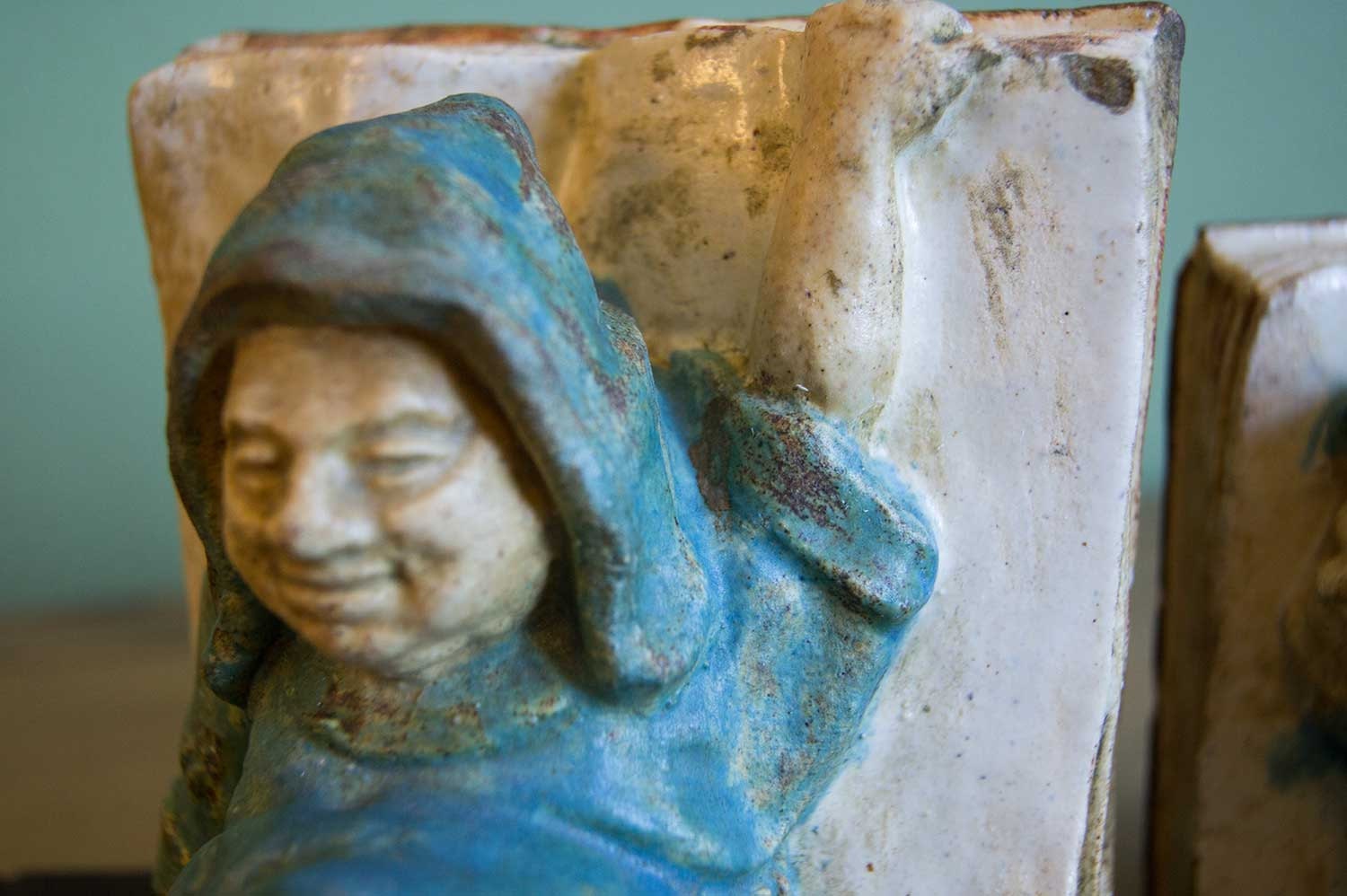 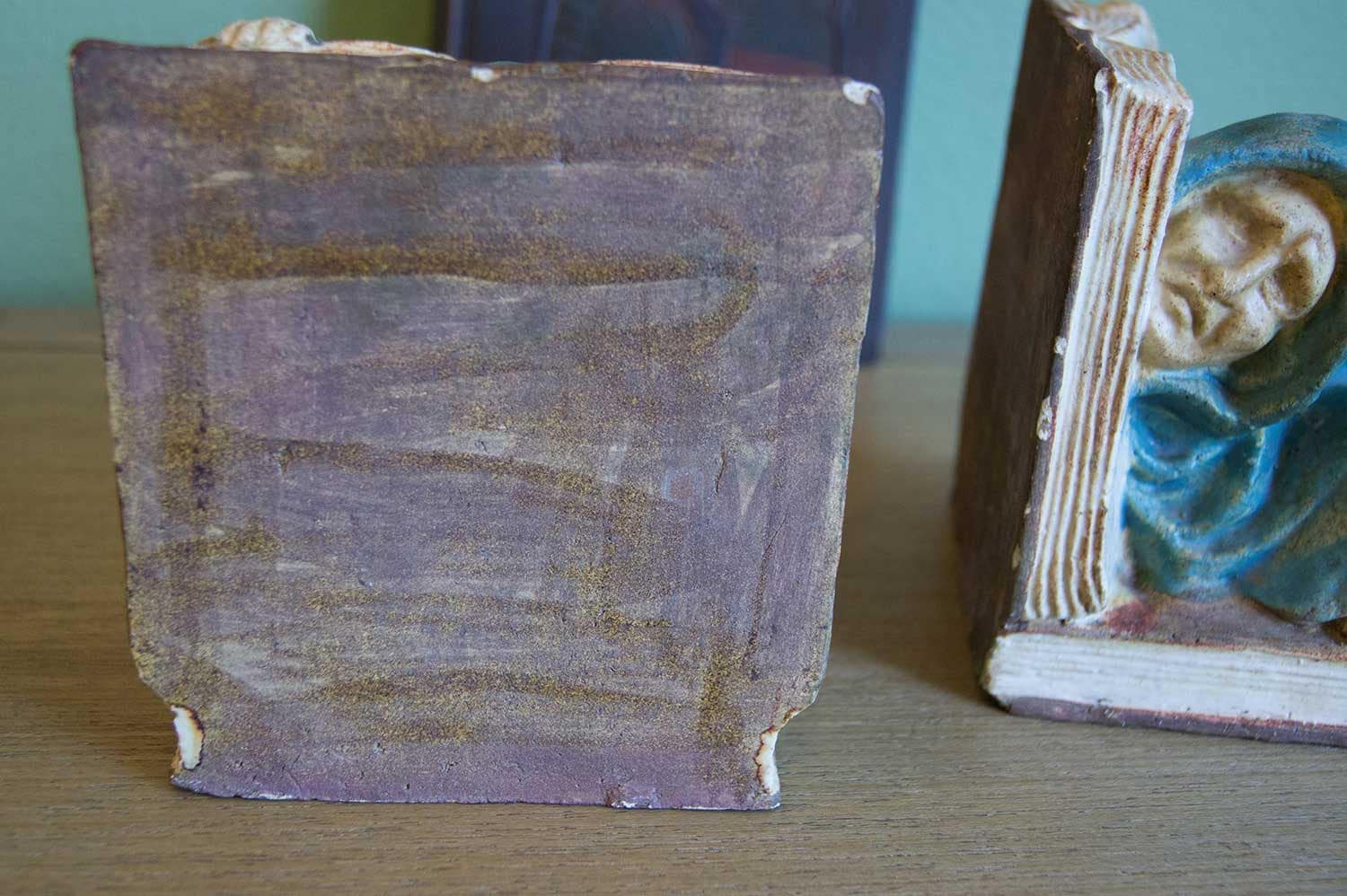 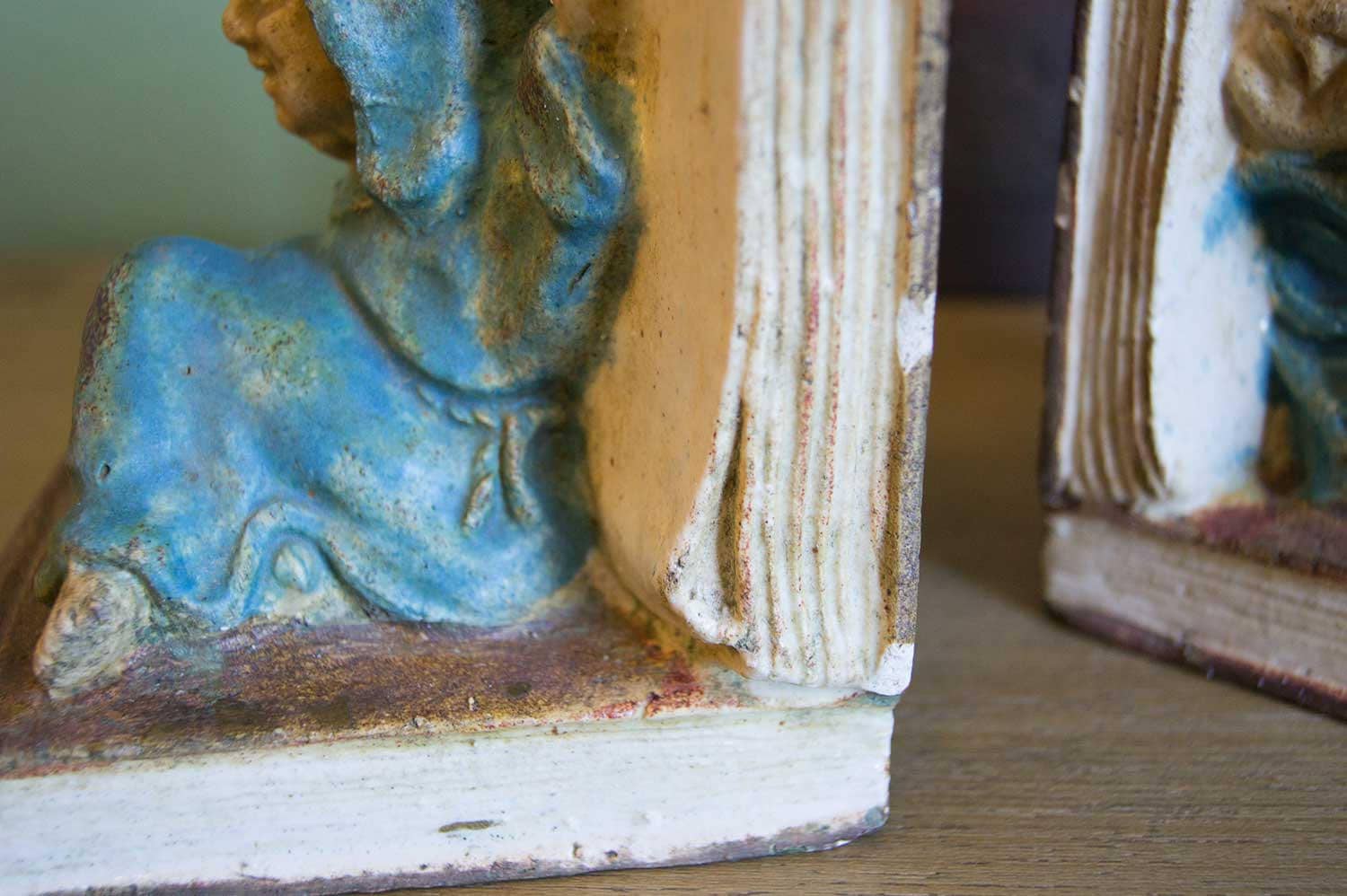 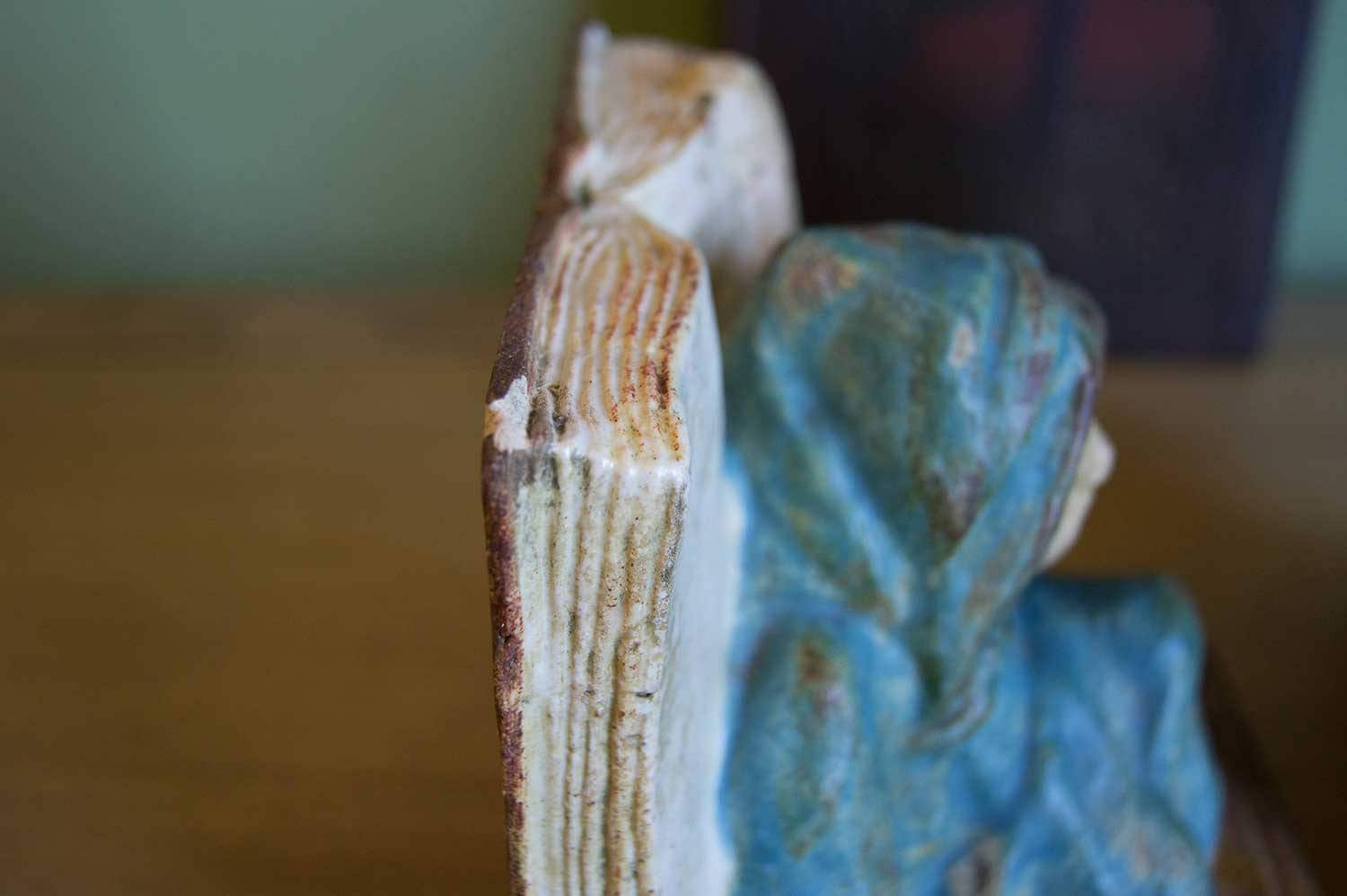 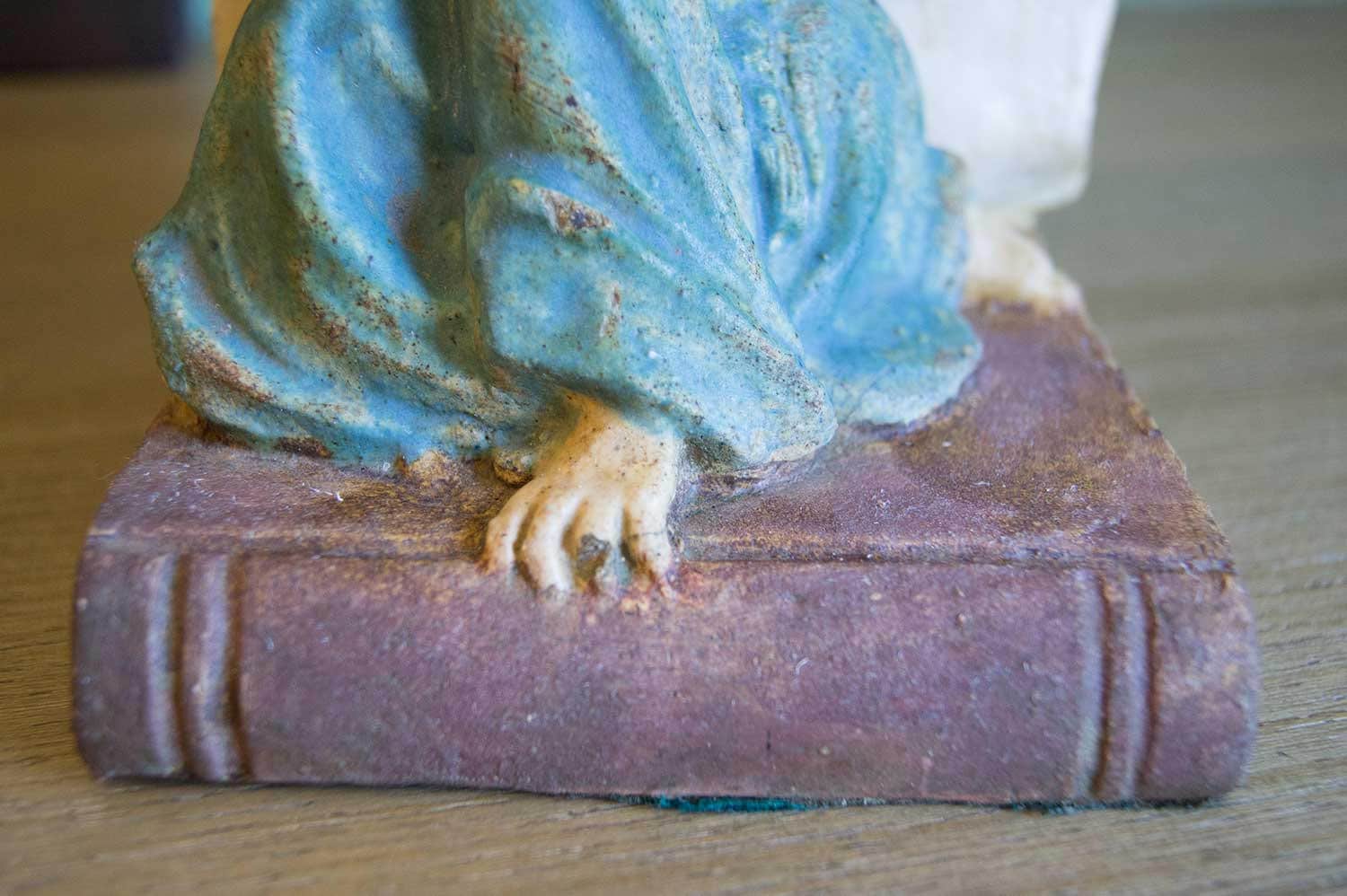 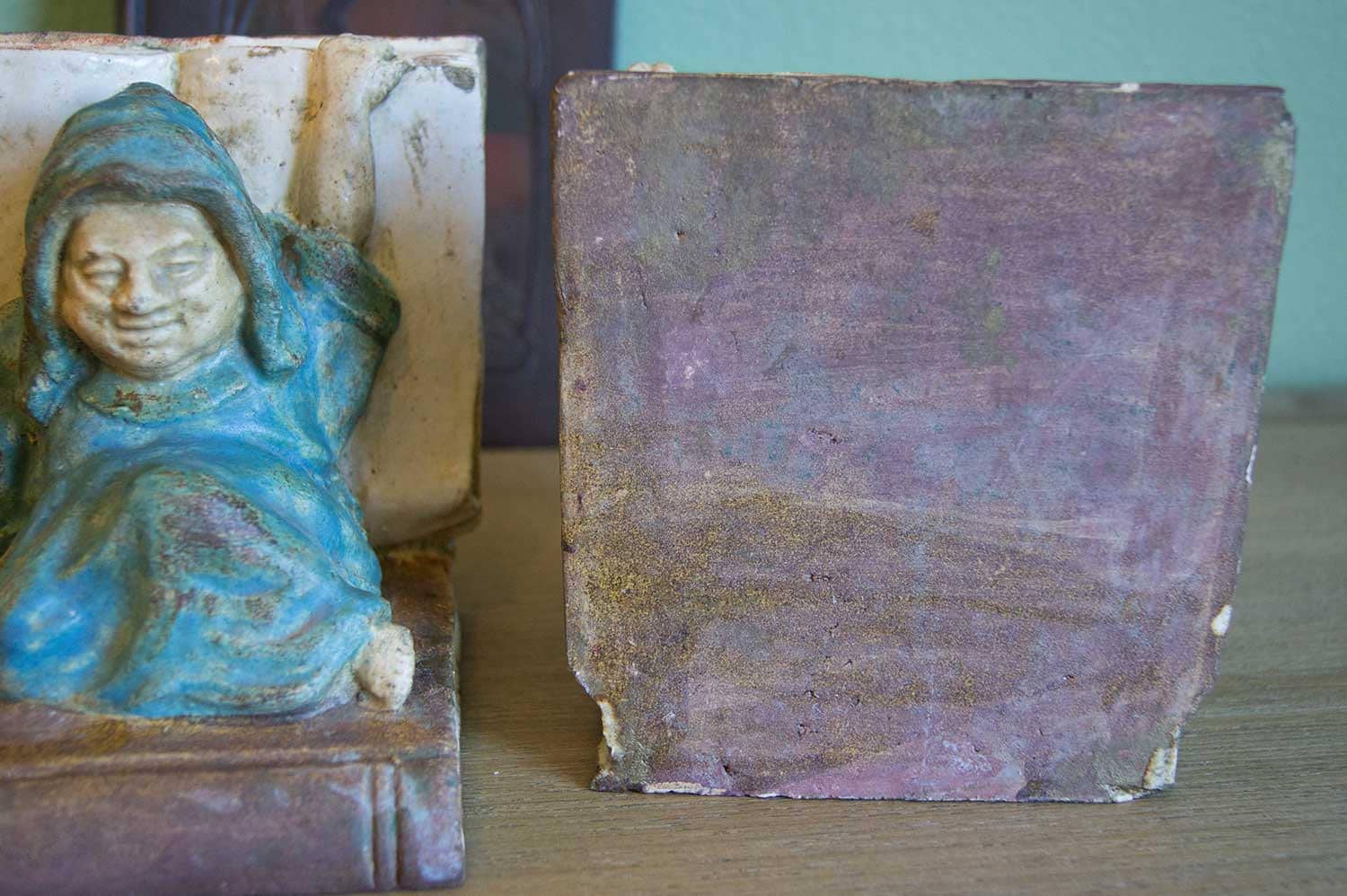 These extremely rare California Art Pottery bookends were made by the short-lived Arts & Crafts company Malibu Potteries. The company was founded by May Knight Rindge in 1926 but burned in late 1931 and closed in 1932.

Two monks have clearly had way too much to drink and are attempting to somehow support the "wall" that is holding up your books. The odd thing about these particular monks is that they are a COPY of another company's Tipsy Monk bookends. Because one can't have enough Tipsy Monk bookends, right? Apparently the California Tipsy Monk bookend market was white-hot in the late 1920's, and the competition was fierce.

The original Tipsy Monk bookends were designed by another California Art Pottery company called Gladding McBean & Co. from San Francisco. The Gladding McBean version are a bit better modeled and have more detail, but that's not what determines value in the Art Pottery collectors market, scarcity determines value. Our less carefully modeled, and wonkily glazed copies are so much more valuable than the other ones due to their rarity. Also - they're just so odd and cool.

In the mean world of 20th Century Art Pottery collecting, figural pots and bookends are highly prized. We knew as soon as we saw these that they were something. In fact, we sent photos to Antiques Roadshow appraiser and Art Pottery expert David Rago of the Rago Arts & Auction Center, who referred us to someone who specializes in California Art Pottery, who gave us our appraisal. They were worth $5000 before the "Great" Recession where many antiques dropped in value, but the Art Pottery market is creeping back up to that level. We're asking the 2015/16 value, but since they had been worth $3000 more, they could easily go up to that value again soon. In other words, these bookends may be a decent investment.

Down to some details; yes, they are dirty. (We don't mean lascivious, we mean in the way that when we found them, they were FILTHY.) We cleaned them very lightly with warm water. We're not professional Art Pottery restorers, and would advise that you have them professionally cleaned and restored by an expert to get back to that $5k value. They have some damage and chips on the sides, one of the Monk's lost half a finger in his drunken exuberance.

Malibu Potteries' Ceramicist Rufus Keeler was known for the color and clarity of his glazes. Malibu Potteries also made a very short run of Art Pottery Bookends. These Tipsy Monk bookends are exceedingly rare. There is another similar set known, and it's in the collection of the Tile Heritage Foundation of Healdsburg, California.

Not only are these Tipsy Monk Bookends desired by Art Pottery Bookend collectors; they fit into the California Art Pottery collector market and the "drunken monk" collector's market. Yes - you read right. "Tipsy" or drunk monks are a thing. This very common theme showed up in European artwork, on beer steins, on tavern signs, on serving trays, you name it. Tipsy monks were a seen as super-amusing in post-Medieval Europe! (This is because monks brewed beer and made wine at Monasteries, and apparently the monks were known to um, sample a bit too much of their wares.) And who doesn't think that alcoholic monks ARE funny and charming? Collectors flock to old things with such imagery - it's weird - and people LOVE weird.

Which leads us back in a full circle to these odd bookends, they're strange, they're scary-cute, and they represent a thousand years give-or-take of monastic drunkenness. Which is why you, my friend, need to own them. (And they're rare, yeah, blah, blah, rare and strange....)

If you have more questions about these guys or want to see more photos, please contact us - we'll be happy to answer the questions and show you more photos. And of course, the shipping is free in USA! (Books pictured aren't included, but if that's what it takes to seal the deal - let us know we'll throw in some nice old leather-bound books.) If you'd like international shipping - please contact us.

Thanks for looking at this listing and for reading.